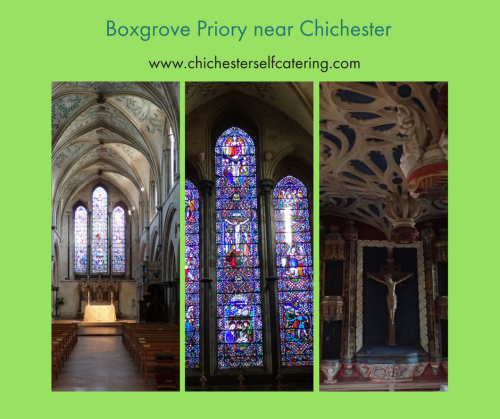 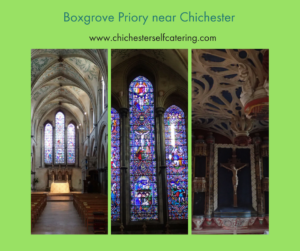 Boxgrove Priory is a stunning building which luckily survived Henry VIII’s dissolution of the monasteries in Tudor times although it lost its West end at this time. It has always has excellent patronage – from Contess’s to the Lord Richmond’s (the Goodwood Estate is very nearby) and is a highly recommended opportunity for some spiritual uplift. You won’t be disappointed.

It is dedicated to St Mary and St Blaise. It dates from the early 12th Century. The Parish is mentioned in the Doomsday Book and there was a church there as far back as the Norman Conquest. The Priory is the “daughter” house of the Abbey of Lessay in Normandy and the ‘grand-daughter’ of the great Benedictine Abbey of Bec Helouin.

It is a surprisingly large church for a very small hamlet (that was) but with the monastery behind it, as well as a large school which was set up just opposite it clearly had a lot of favour. The monastery has 13 monks in residence at most during the mid 13th Century. 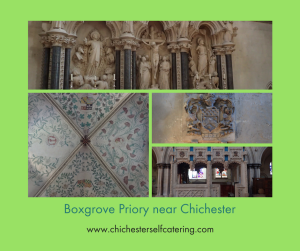 The nave is wide and looks towards a beautiful stained glass window. The organ is also of some note and opposite is a stunning private chapel for quiet contemplation, whilst there are various other chapels to the sides as well.

A brief History of the Priory:

The Priory has a splendid Chantry Chapel built by Thomas West, 9th Lord de la Warr, Lord of the Manor of Halnaker and patron of the priory, in the 16th century. He was forced to exchange Boxgrove Priory for an estate in Hampshire in 1538.

Thomas West commissioned a local artist, Lambert Barnard, to paint the ceiling of the nave with the arms and crests of his own and his wife’s families, entwined with flowers and foliage.

Halnaker and Boxgrove remained in the possession of the Crown until they were granted to Henry Fitzalan, Earl of Arundel, in 1553. When he died in 1579, the property reverted to the Crown until it was sold to Sir John Morley in 1587.

It remained in the Morley family until Sir William Morley died 1701, leaving a daughter, Mary, who married the 10th Earl of Derby. After her husband’s death, the Countess returned to Halnaker and engaged in charitable work.

The worship at Boxgrove Priory aims to be of the highest standard that we can achieve. The Sunday worship is eucharistic and engages the human senses with fine and noble ceremonial and music of a very high standard. Boxgrove Priory’s choir is justly famous for the contribution that its members make to the ethos and ambiance of the place. It is a place where art flourishes, and where great care is taken over the worthiness of fixtures and fittings.

For an aerial view – have a look at this video too! https://youtu.be/OrdE14GkIhU

© Chichester Self Catering 2017. All Rights Reserved.