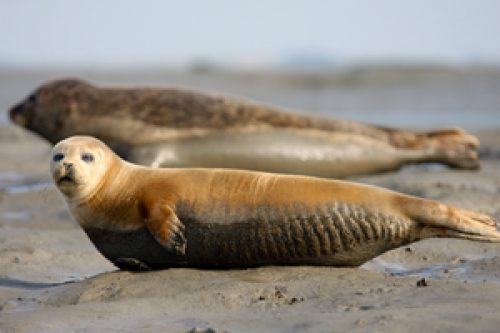 A number of Common Seals (Phoca vitulina) also known as harbour seals live in the Solent and often visit Chichester Harbour. Each one has unique markings and even their colourings can be different ranging from tan to grey, black and brown. The females are generally smaller but with a longer lifespan. Atlantic Grey seal are also occasionally spotted. This is the only known rookery in the Eastern English Channel and so they are considered regionally unique and therefore very important.

Chichester Harbour provides an ideal habitat for them. Here they are relatively undisturbed and food is plentiful, as they like to tuck into fish and crustaceans. In addition there is plenty of mud and sand for them to rest on. They can

be seen anywhere in the harbour and have been known to swim into the marinas and take a nap on the swimming platforms of moored boats!

Key findings include:
• Number of harbour seals currently estimated at 23-25, with 18 being the most recorded at any one time. Being a small population makes them more vulnerable to impacts. It is the largest population of Harbour Seals on the south coast though.
• Only two significant haul-out sites exist, one in Langstone Harbour and one in Chichester Harbour.
• Both haul-out sites are used on a more or less daily basis but Chichester Harbour is used by more seals.
• The seals display often individual foraging behaviour and are faithful to their preferred foraging sites.
• The seals predominately forage in the Eastern Solent, between Southampton and Selsey Bill, often in the harbours, and regularly cross to the Isle of Wight.
• Seal foraging activity can change between seasons.
• Seal foraging takes place in a variety of habitat types and can focus on discrete seabed features such as rocky reefs and underwater structures.

Seals come ashore to rest, mate, give birth and moult, a process known as hauling out.

Harbour and grey seals typically have differing habitat preferences for hauling out. Grey seals tend to favour remote and exposed islands and coastlines, often on rocky shores. In contrast, harbour seals often occupy sheltered sandy and muddy bays, estuaries, harbours and offshore banks. However, the two species do overlap in some areas and harbour seals can be found in rocky areas and grey seals can be found in sandy and muddy areas. Seals are often faithful to their haul-out sites and will return to same one after foraging trips, however, grey seals particularly may travel to new haul out sites and forage from there.

If seals are on extended foraging trips they are able to sleep at sea, a process known as “bottling” where they hang vertically in the water with their head above the surface allowing them to breathe!

Prey includes sand eels, cod, haddock, bass, mullet, herring, flounder and cephalopods (eg cuttlefish and octopi). Seals are often sighted up river where they may be feeding on salmon, trout and grayling. As their prey suggests they are able to hunt in mid-water or on the sea bed and in murky conditions are able to use their long and sensitive whiskers to help locate prey.

Harbour seals will normally forage within 50-60km of their haul out sites on short trips, whereas grey seals may go on extended foraging trips several hundred kilometres from their haul outs and lasting several days.

Harbour seals pup in the summer months, typically June to August and as they often haul-out on intertidal mud and sand flats, where they will also give birth, their pups need to be able to swim almost immediately to avoid drowning. As a result the pups have a more waterproof coat, rather than the white coat of the grey seal pups, and take to the water on the first high tide. They will usually eight 8-12kg. The pups are excellent swimmers and are very curious about other objects – including humans and boats!

The life spans of the two species are similar with females living 25-30 years and males 20-25 years. Males reach sexual maturity at around 10 years and females at around 5 years.

We are really blessed to have some a healthy population of seals around the coast – hopefully if you are in one of the Harbours you may see one!