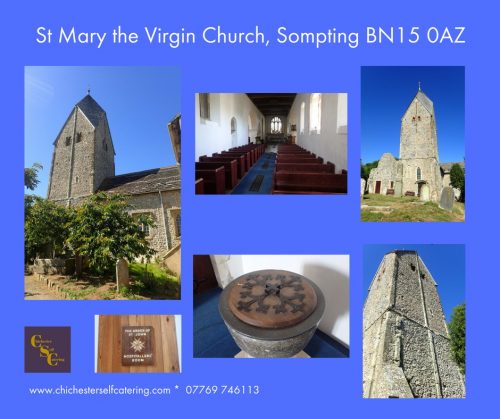 Its the “Helmet Church”!

If you are travelling on the “South Coast road” – the A27 between Worthing and Brighton you will go on the bypass through Sompting.

Look to your left and you will see an odd looking spire – a Norman helmet – which is St Mary the Virgin’s of Sompting’s steeple! Just a little further on is another interesting building which is a school.

It is a beautiful 10th Century Saxon Church with some unusual features. You can only get to it on the East going carriageway and re-join the same way. (BN15 0AZ) 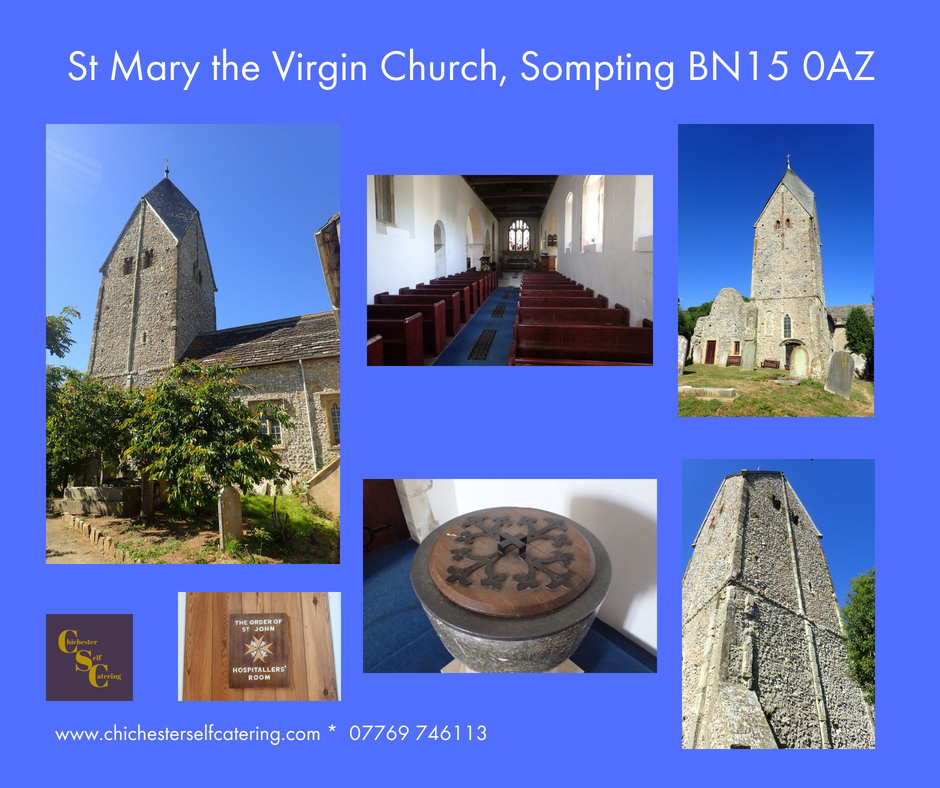 The  most striking feature is the Saxon Tower which was built circa 960 AD – and is the only surviving example of a Saxon tower with the Rhenish Helm (helmet) reflecting the Saxon influence brought over from Coblenz, Andernach and Cologne.

Outside the tower has the typical Saxon triangular-headed windows, a pair of bifora, Saxon long-and-short work in the vertical pilaster strips and re-cycled terracotta tiles from a derelict Roman villa.

AD 477 Pagan Saxon invaders land near Selsey Bill and drive the indigenous Britons north into the forbidden Anderida Forest which is 130 miles East-to-West and 30 miles North-to-South.

AD 878 King Alfred (the first “King of England”) defeated by the Vikings, founded his capital in Winchester – 50 miles to the West of Sompting. Wessex incl Sussex is ruled by King Alfred.

AD 1066 Duke William of Normandy defeated King Harold at the Battle of Hastings.

AD 1312 Knights Templar, disbanded by the Pope and their assets are transferred to the Knights Hospitallers.

AD 1540 King Henry VIII disbands the Knights Hospitallers and confiscates all their possessions. 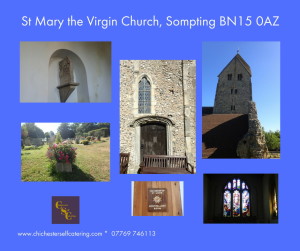 The church itself has many original Saxon features dating to the 10th century – stone carving of King Knut; Saxon shaped archways with Corinthian capitals decorated with wheat and grapes which symbolize Holy Communion or The Host and more.

The Knights Templar Chapel in the North Transept from the 12th century features octopartite groining over each of the two chapels, a Saracens head corbel as well as local landowners memorials. The chapel and the sanctuary now serves as the baptistry. There is a free standing Norman font too, dating from the 13th century.

It is a beautiful, large church with a stunning, well maintained graveyard too. Spend some time here and help by donating some money for a new church boiler too!

A little further on from the Church is Sompting Abbotts Preparatory School – which has another magnificent building that can be seen from the A27 in part. It is housed in Sompting Abbots House and was called Sompting Manor. The huge Estate (over 1,500 acres) was inhabited since the Neolithic period but following Henry VIII dissolution of the monasteries it was granted to the Duke of Norfolk (Arundel). The current building dates only to 1856 and was designed by Edward Hardwick who went on to build Euston Station.